Congratulations to Dr. Schuyler Wolff, for her excellent presentation and defense of her doctoral thesis "Characterizing the Evolution of Circumstellar Systems with the Hubble Space Telescope and the Gemini Planet Imager" 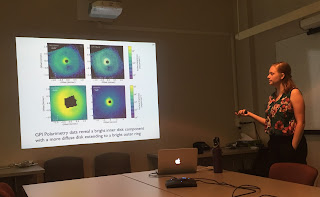 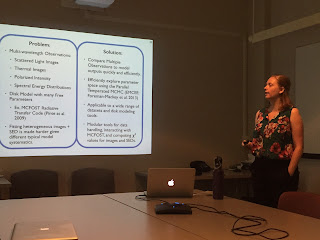 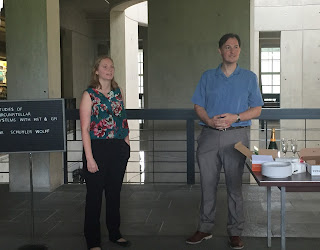 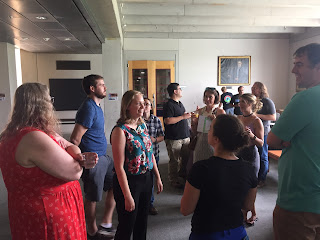 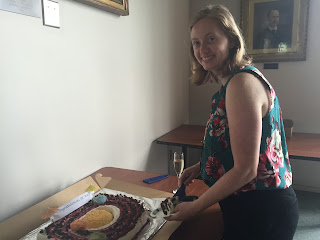 Imaging the planet around GJ 504 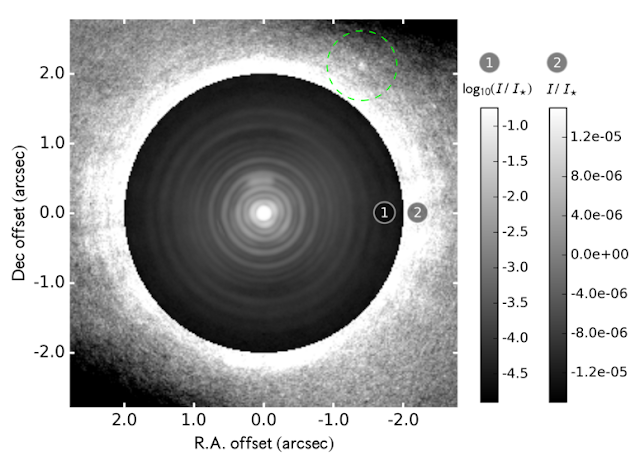 Andy Skemer, Caroline Morley, myself, and the rest of the LEECH Science Team posted a paper on the arXiv today: Characterization of the Coldest Directly Imaged Exoplanet, GJ 504 b, and Evidence for Super-Stellar Metallicity.

The article, soon to be published in ApJ, describes new observations of the planet candidate discovered to orbit GJ 504 a few years ago (Kuzuhara et al., 2013). By measuring the thermal emission from the companion in three custom filters in the range 3.6--4.1 microns, we’ve made new inferences about the temperature, density, and composition of the atmosphere. The observations were made possible with LMIRCam, an AO-fed infrared camera on the Large Binocular Telescope.

I was responsible for the entirety of the data reduction, taking steps familiar to other high-contrast observers in this wavelength regime:
GJ 504 b is on the extreme faint end of all the planetary-mass companions imaged to date (as Figure 4 in the journal article illustrates). Fortunately, the combination of relatively high angular separation (2.5 arcsec from the host star) with the deep sensitivity of LMIRCam--as shown above in the 3.9 micron co-add--was high enough to secure a detection at each filter. The wavefront correction provided by the LBTI AO system was such that Airy rings spanning three orders of magnitude in intensity are evident, out beyond a 1-arcsec radius. Even without PSF subtraction, the planet is evident at a contrast of 1E-5, in the northwest corner of the co-add image.

There is a lot more we could learn from the infrared SED at wavelengths redward of 4 microns. For such a faint object, however, that part of the spectrum is not likely to be accessed from the ground. Therefore, in the future GJ 504 will make an excellent target for JWST NIRCam.
Posted by Unknown at 2:26 PM 2 comments: The next GPI engineering and commissioning run starts this coming week. GPI goes on the telescope on Monday the 8th!

EPSIG members Schuyler Wolff and Alex Greenbaum will be there in Chile, along with many other members of the GPI team.
Posted by Marshall at 1:51 PM 1 comment:

In early August, Lucie Leboulleux got our Boston kilo-DM working. Here's the first interferogram taken of the DM with a test pattern, as seen by our 4D Accufiz.

This engineering-grade device is the first of the new generation of circular-format kilo-DMs to be shipped out from BMC. We'll get

Kudos also to Chris Long for helping with machining the mounts, and Mamadou and Marie for software and debugging.